Another adorable Cu-poche figure by Kotobukiya was released from the popular series, Puella Magi Madoka Magica.  Today we are looking at Cu-Poche Mami Tomoe.

Mami Tomoe is the first to rescue Madoka and Sayaka from a witch on the series’ first episode. She has a lady-like and mature personality who loves tea. She acts as a mentor for Madoka and Sayaka if they decided to become magical girls.

I got Cu-Poche Mami Tomoe last week, another lovely figure that I am very happy to receive. This is sponsored by Kotobukiya. 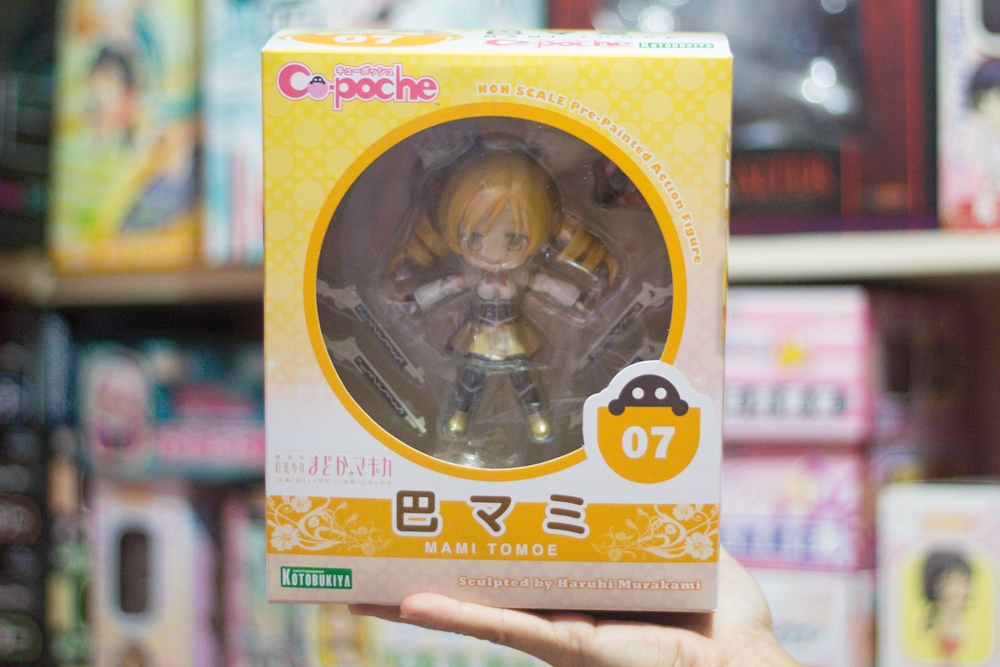 I am excited to get my hands on her because I am one of the fans of the anime which I truly enjoy watching. From the moment that Kotobukiya announced her release, there’s this idea in my head on how I want to take her photos.

Cu-Poche Mami Tomoe is pre-painted posable figure, she comes with 3 face plates (smiling, crying and winking), 4 rifles and optional hand parts. She also comes with her famous arch rival, Charlotte, a candy witch (which I think is just so adorable). She is sculpted by Haruhi Murakami.

The first photo set is based on the magical girls when they get into the witch’s domain on the episode where Mami had her encounter with the candy witch, Charlotte. I made the scene dark and bright lights as candles float in the background.

My reaction when I finally unbox her, she is very beautiful. Kotobukiya did a great job with Cu-Poche Mami Tomoe, for you can actually see the signature artwork of Ume Aoki in her eyes. Just like Cu-Poche Madoka Kaname, I also love how Mami’s dress was sculpted. Even in her deformed size, Mami still possess her mature behavior and style. She can be portrayed as yandere by the look in her eyes in some angles. （ｖ＾＿＾）

If you are a fan of Puella Magi Madoka and magical girls,  Cu-Poche Mami Tomoe is a precious item for your collection. With Cu-Poche’s multiple articulation points, you will able to recreate your favorite scene from the anime. Pose her in cute and creative way. I’ll be sharing more Cu-Poche Mami Tomoe photos tomorrow in Tea party themed set. Watch out for it!

These photos are also published on Kotobukiya Facebook page.